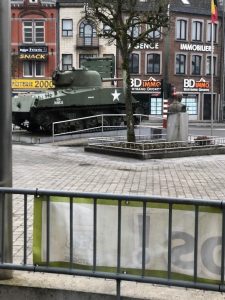 That’s when my son said, “Try again, and search for Café Nuts. It’s a famous place there.”

From my passenger seat, I looked at him with raised eyebrows. We were driving the heavily forested, snowy backroads on our way to Amsterdam from Luxembourg City, headed for the small town of Bastogne. What did “nuts” have to do with that?

My son was correct. Café Le Nuts is the center piece of a famous World War II incident. It’s a Bastogne landmark and in the town square. The story’s short version goes like this: The 101st Airborne had commandeered the town of Bastogne as the Allies were marching from western Europe east to Berlin. Months after the June D-Day invasion, by December of 1944, the Germans counter attacked. Bastogne was on Hitler’s way to regain access to the sea.

Having surrounded the Americans, the Germans sent an envoy to demand surrender from US General McAuliffe . The general famously replied, “Nuts!” It was typed and delivered to the confused Germans who eventually realized the American meaning of “nuts” in this case was, “Go to hell.”

This legendary story centers around the last deadly battle of WWII which Americans call The Battle of the Bulge. Bastogne is an epicenter of the battle’s history. Today, American tributes in the form of monuments, museums, and even an American tank in the town square – abound in Bastogne many near Café Le Nuts.

What’s so great about this story is how it provides a perfect example of what Center Stage graduates and neurologists call prosody.

What is “prosody”? It’s the scientific and neurological term for how we say words. It refers to all the body language and verbal intonation that give words their emotional context and meaning. Human communication requires prosody. Without it, the linear meaning of words is misunderstood and misinterpreted. The lack of prosody in email is one of the reason why emails are so often misinterpreted. What the writer hears in his head is not what the reader hears.

When we are relaxed and during most normal circumstances, prosody is clear. But when stressed, distressed, or stuck, your prosody shuts down, too. That’s when people are most likely to misunderstand and misinterpret prosody. As communicators, we must factor the total situation into our communication. We have to consider what is going on with others. We have to learn when to use email and when to not.

Most historians affirm that Hitler’s last stand created a tragic and futile loss of life on all sides of the war, but the General McAuliffe’s spirited response has inspired soldier’s, movie scripts, and even a café on Bastogne’s main square. Sure enough, Café Nuts is right there as my son was certain it would be.

Break Out the Lemon Drops

The Hack for Going Blank During a Talk